THE HISTORY OF THORRINGTON BELLS

There are 6 bells hung for change ringing to the key of G, the oldest bell dating back to 1443.

In 1901 the wooden frame was adjusted to fit the new treble bell to make the octave up to 6. One morning in 1928, while ringing the tenor bell, it broke its mountings and ringing was stopped for a time. It was thought that it would be a good idea to re-hang the bells lower in the tower in a new metal frame as the wooden frame and fixtures had seen better days.

Once the money was raised, Alfred Bowell of Ipswich took on the job, and the bells were taken out of the tower in February 1933 and taken to Ipswich for all new fixtures, fitting & a frame was made to accommodate 8 bells. The total cost was £220, in today’s money about £150,000.

In 1937 a ringing galley floor was made to shorten the draft of the ropes and make a choir vestry in the base of the tower. A women’s working party raised the money for the ringing room to have a galley window.

DETAILS OF THE BELLS 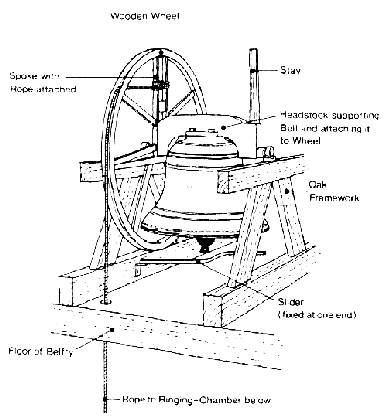 THE FUTURE OF RINGING AT THORRINGTON

Over the years Thorrington tower has had a great number of ringers and was known as one of the leading towers in the area and stood for good striking and standards.

With passing years the numbers of ringers has fallen.

To keep the art of ringing going in Thorrington tower and to help this English art stay alive for the next generations. new ringers are needed. It takes from 2 to 3 months to learn to handle the technique then the rest falls into place with practice & commitment.

Ringing is about calling people to worship but most of all it’s about having fun and being part of a team, we have nice social events, day trips and more!

If you are just visiting the parish or you are already an experienced ringer or team of ringers, you are most welcome to come along and ring our bells by arrangement. Please do get in touch

New ropes for our Bells

For the first time in 117 years Thorrington church bells now has a set of six new ropes.

In April an order for six new ropes was made to Ellis Rope Makers in Hawes. Ellis is now only one of four Church bell rope makers in the country. Once there used to be more than twelve but with years passing by, keeping small companies going has taken its toll.

The old bell ropes getting near to their end of their lives and needed replacing.

Each new rope is over 55 foot long and costs over £150 each. Donations have been made to help purchased the ropes, with each donation made in memory of a past ringer at the tower. A plaque will be place in the tower to mark this. Thanks goes to all that have helped with the donations.